How to Identify Ionic Contamination Sources in PCB Assembly

Whether it's a catastrophic failure or a latent field failure, nothing is more frustrating and expensive than when a circuit board stops functioning. The design was prototyped and thoroughly tested, and yet, it has problems once in full production. What happened?!

I can’t speak to every potential quality control problem that can creep into a PCB assembly process, but contamination continues to be an underlying issue in many PCB reliability problems. There are essentially two broad categories of PCB contamination, ionic and nonionic. In this article, we will concentrate largely on the ionic contamination sources.

WHAT IS IONIC CONTAMINATION OF A PCB?

Ionic contaminants are remains of flux that are left behind during the assembly process. Ionic compounds are held together by electrostatic forces -- the compound itself has a zero net charge. These electrostatic forces are composed of positively charged cations and negatively charged anions. A simple example is table salt (sodium chloride), composed of a single positive sodium cation (Na) which lacks one electron, and a negatively charged chloride anion (Cl), which has an extra electron.

When populating the board with components, the components themselves also can carry various ionic/conductive contaminants to your assembly including cutting oils/fluids, biocides, and corrosion preventatives. Be aware of common nonionic materials that can also affect the assembly steps – process oils, mold releases, etc. These nonionic materials can be detrimental down the line.

Contamination sources can originate at any point in the assembly process, so let’s start at the beginning. You’ve just received a new lot of bare boards which you will populate with the necessary components for your product.

COMMON IONIC CONTAMINANTS FROM THE BARE BOARD FABRICATION 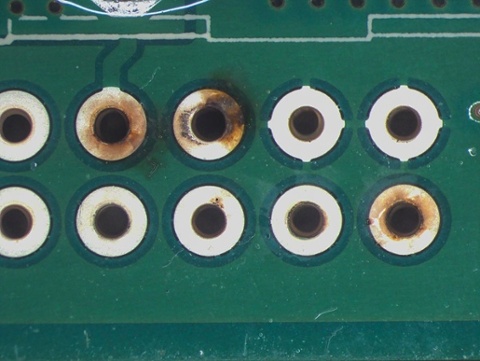 Everyone is familiar with flux residues. Fluxes, whether in liquid, cored wire, or compounded as a paste, can leave residues that can cause serious reliability defects if not removed. Common conductive flux residues from the soldering process can include various unreacted activators, binders, rheology components, and saponifiers. Among these are numerous iterations of acids (abietic, adipic, and succinic, among others), highly basic ingredients (amino compounds), and even constituents found in “soaps” such as phosphate and sulfate ions. All of these contaminants must be cleaned from the substrate. Cleaning processes include strict solvent cleaning such as vapor degreasing, and aqueous chemistries in the common batch or inline cleaners, as seen on the manufacturing floor. 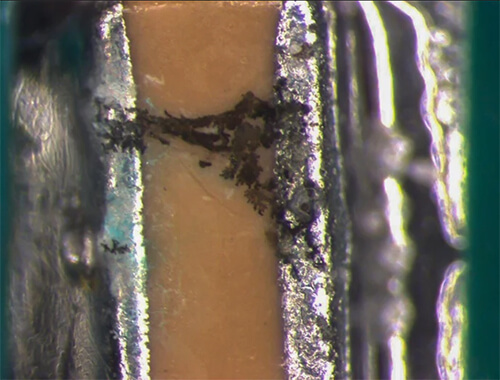 In addition to these commonly found residues, residues from the cleaning process chemistry itself must also be removed. These cleaning-related residues are noticed more in the aqueous cleaning systems. Many systems use saponifiers to neutralize and emulsify the flux residues and make them easier to rinse/remove from the substrate. These components are highly ionic and can also enhance the dendrite and/or electrochemical migration (ECM) mechanism if not removed. In addition, corrosion prohibitors and surfactants are commonly employed in these products. This is not a bad thing in itself, but care must be taken to ensure that the corrosion prohibitors and surfactants are removed along with the soils during the cleaning process.

Poor quality control from the PCB’s fabrication, to the soldering and component population, to the final cleaning stages, are all potential sources of contamination. Many of these contaminants can be found by ionic contamination testing and analysis such as resistivity of solvent extract (ROSE) testing, ion extraction, and chromatography. They can also be identified during initial high humidity validation testing at the beginning of the project.

Strict quality control and standard operating procedures during the PCB assembly, stages of assembly manufacturing, and validation testing can go a long way in preventing a reliability nightmare. Just think – simple mishandling of a part by an operator not using gloves could result in the transfer of salts and oils from skin to the substrate. Such negligence could potentially be catastrophic for your item!

What You Need to Know About PCB Design
Mar .24.2022
The word PCB refers to polychlorinated biphenyl, and it is a family of stable industrial compounds. Common uses for PCBs are lubricants, heat-transfer fluids, plasticizers, and solder pastes. These chemicals are banned in the United States since the 1970s due to their toxic effects on the environment. Especially harmful to invertebrates and fish, PCBs remain in the food chain for years. Sourcing Goods And Suppliers In China: A How-To Guide For Small Businesses
Sep .02.2021
This article is first in a series exploring how U.S. companies can source goods in China, and it focuses on how those companies that cannot afford to establish overseas offices or manufacturing operations can effectively and efficiently source suppliers in China. We will focus on how a smaller U.S. company can and should go about locating suppliers in China.
Leave a message